I write songs about emotions, space, climate change, the internet, and a few of the things in between.

I play viola, electric violin, keyboards and recorders, and recently I've been experimenting with melodica, EWI and [it was bound to happen eventually...] ukulele.

I've been writing songs for as long as I remember — although for most of that time I wasn't singing them myself (or, at least, not in front of anyone.)

Having spent many years working exclusively as an instrumentalist, it was only through the encouragement* and guidance of my friends and colleagues (and a LOT of practice) that I eventually developed the confidence and technique to sing lead vocals.

Finally ready to perform the songs I'd been writing for many years before I was able to sing them, I released a solo album of original songs, Roll as a Hexagon, in 2018.

I also compose instrumental music (some of which you can find on my folk viola site), and draw pictures.

*Some of the encouragement wasn't even made of wine. 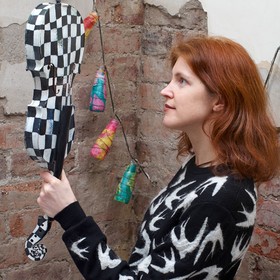